Warning: Parameter 2 to qtranxf_postsFilter() expected to be a reference, value given in /home/customer/www/slowmed.eu/public_html/wp-includes/class-wp-hook.php on line 308
 Interview: Eduardo Mangas - SlowMed

Returning to Portugal, after many years working abroad, Eduardo and his wife Nicole resumed the management of a restaurant, which they had rented and they had specialized in octopus dishes. The restaurant is “Casa do polvo” in Tasquinha.
In addition, Eduardo is dedicated to buying fresh octopus from traditional fishermen, freezing it and distributing it to the best restaurants of the region. 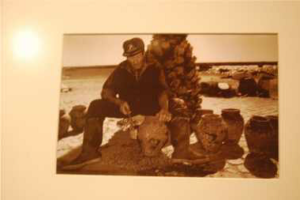 Description of the environment where one of the activities listed above takes place:
(Please, specify: 1 – name of the local area, 2 – if it’s a place well-known for a specific activity and – if so – which one; 4 – information about plants and landscape related to Mediterranean environment linked to the activity; 5 – any relevant information linked to the research). If it’s possible, take pictures/shoot video of this place.

The fishing activities are taking place at St. Luzia, a small, fishing village, that has always been linked to the sea. Initially fishing was being done by fishing boats and hook fishing, whereas from 1842 until the mid-20th century when the tuna traps appeared. From 1927, the fishermen started to commit to octopus fishing with buckets and pots, due to which Santa Luzia is still considered the “capital of the octopus.” 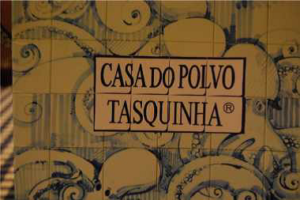 TECHNIQUE/METHOD
Description of the technique/method/practice implemented. Please, specify – if it’s the case – the timing, the steps and the aim of the activity (to have more material: pictures + video shooting of the usage if it’s possible).
The octopuses have been captured for ages with clay pots tied together with a rope. In the recent years, plastic ones are being used. They are being submerged in specific places for several days until the octopuses nest in them and then they are recovered to the fisherman’s boat.
TOOLS

List of natural products (fruits, vegetables, plants, fish and so on) depending on the activity/the activity is done for and related to the Mediterranean Diet. Promotion of the territory. Promotion of biodiver Promotion of slow and 0% consumptionif it’s the case, how the 0 Km production is working at local level: Region, if it’s a place famous for a specific activity, why and so? 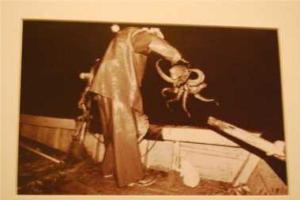 The tools needed are clay pots called “alcatruz” or plastic pots and a rope to link them together. 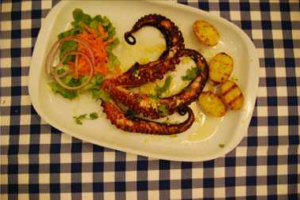 How did you learn this method/technique/practice?
The fishing technique was acquired by years of experience in fish restaurants and fishing, which also led in specializing in octopuses.

The turning point from traditional fishing by hooks or boats towards traps was 1842 and later on, by 1927 the fishermen focused in octopuses, so that Santa Luzia is now being referred to as the capital of the octopus.

The information show that this transitions to new fishing methods where simultaneously being adopted by the whole fishing community. The younger generation of fishermen prefer not to wait for the mollusks to fall asleep, so they prefer to use a “covo,” a plastic trap with a sardine inside.

Mediterranean Society and Environment
Any local tradition this method is connected to? If yes, which one? Can you describe it?

The fishing tradition was a matter of Santa Luzia being a seaside community.

Is this activity connected to the territory you live in? Is it strictly linked to the specificity of the environment?

The octopus business leading position is linked to Santa Luzia due to the fishermen’ specialization in them only, that provided them with competitiveness and economies of scale in contrast to the other fishermen of various seafood.