Warning: Parameter 2 to qtranxf_postsFilter() expected to be a reference, value given in /home/customer/www/slowmed.eu/public_html/wp-includes/class-wp-hook.php on line 308
 Interview for the enterprise: Gallina Blanca - SlowMed

Interview for the enterprise: Gallina Blanca 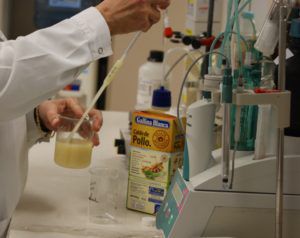 How would you describe the process of preparing Gallina Blanca soups (highlight the most important part of the process: harvest, selection of products…)?

Gallina Blanca’s mission is to offer healthy and great tasting quality products. Therefore it is essential to consider the entire product value chain, from the precise and careful selection of the raw materials used in all recipes based on very rigorous standards of quality, even more than the legislation itself, and the technology and cooking time used in our manufacturing processes. All with the goal of ensuring that after the culinary process all properties are still the best choice on the market for all our customers and the general population.
Which tools are the most important in the process?

Since the control of fire is much earlier to the ability to have a suitable container for soups, the conjunction of both possibilities did not occur in the Mediterranean basin until about 6000 years before our era, moment that can be set as the historic start of this culinary preparation.
In the Mediterranean, the soups that are made in addition to the benefits of incorporating the typical components of the region. As a culinary preparation, it is cited by the Roman writer Apicius (Century I) by mentioning the caccabus as the container for preparing soups. Referring to the Middle Ages, the book “Sent Sovi” cites countless soup recipes varying its composition according to the social situation and the difference between a normal day dish and a festive dish. In any case, there is the Mediterranean variety, being soup the most common form of sustenance among the rural and working classes who up until recently had soup for breakfast, lunch and dinner. In fact, soups and purees were the everyday food of the people in the Middle Ages, reserving roasts and stews for gentlemen.

To make soup we need energy and a container capable of withstanding the heat and containing the liquid. The preparation conditions (“modus operandi”), consisting essentially of a prolonged boiling, cannot generate potentially harmful substances and provide a product that meets proper microbiological hygiene conditions. It also provides an increase in digestibility due to prolonged and consistent fractioning of proteins and starches during the boiling process, releasing a large quantity of peptides, interesting for their functionality and nutritional benefits.
How important is the land/soil in the production of soup? (use of proximity products, own crops…etc.)

Soups and broths not only have nutritious but also gastronomic value. They are characteristic of the Mediterranean Diet. We must emphasize that in the Mediterranean culinary tradition, eating and food don’t turn their back on the pleasure of taste. The historical daily diet is frugal and based on vegetable origin foods with a predominance of cereals and legumes. Meat as the main item only appears in religious or family celebrations. The combination of food is linked to the combination of flavours and somehow, one can say to the selection of ingredients for each recipe.

The concept of soup is broad. We have broths (or “bouillon”), usually made out of meat or fish, and also vegetables, in which whole grains are cooked or processed into pasta or meal. We have stews, thick mixtures of multiple elements, generally vegetables, with some added flavour of meat, fish or fat. Purees can be of only one or more vegetables. There of bread soups and raw soups like gazpacho.

BACKGROUND/PERSONAL ACTIVITY
Generational Importance. On a personal level, why did you decide to devote yourself to this sector?

The Mediterranean diet is a model and lifestyle in all areas of our culture, and may be the answer to future social and demographic challenges, it is a sustainable and healthy model with a lot of scientific evidence that indicates an increased food consumption following the Mediterranean Diet pattern can prevent most noncommunicable chronic diseases.

Rarely one stops to think about the concept behind the Mediterranean Diet, a daily and close diet, of the working class of the Mediterranean area. Soup is very versatile, and there exists a variety of recipes, such as “sopa boba”, food provided to the poor in convents, and “potage blanc”, based on almond milk, which the French and citizens of other countries already ate in the Middle Ages as a delicacy.

Soup serves a social aspect, identifying the local territory, preparation and selection of recipes, the individual’s behaviour and attitude enjoying a meal strengthens identity, the ties and the development of healthy eating habits.